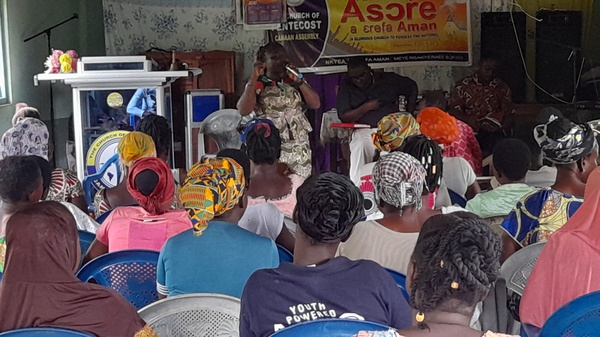 The Bia west MP engaged women in the constituency.

The MP of the Bia west constituency Dr Augustine Tawiah engaged some women in his constituency on a life changing program that he has initiated.

On the 10th of October 2020 the MP visited Cannan a community in his constituency where he has initiated a baking program to transform the lives of women. And over 50 women has been enrolled in just one community.

He urged the women to learn every single thing and take it very serious because this is an opportunity many have been searching for and it wealth to change their lives.
The MP in his submission outline some plans he and the NDC government  has and will be implemented when they are voted into power on the 7th December 2020.

Dr Augustine Tawiah spell out some projects that he has started in the constituency and basically in the community where in was standing, he talk about the school under construction there and that of New Agogo a nearby community

Dr Augustine when on to address the women that he and his government will make great impact on their lives when they are voted into power,  he said they not just learning how to bake but they will be given a start up capital to start their own businesses and will no more rely on other people for help.

Dr  Augustine Tawiah assured the women that when he is voted for , there is going to be a massive transformation in their lives, he said the NDC has alot of women empowerment programs in the pipeline,  that is why the flagbarrer Mr John Dramani Mahama chose a female as his running mate, and they are looking forward to touch the lives of women.

"This is just the beginning there are great things coming let's just vote for His excellency the former president John Dramani Mahama and me" said Dr Augustine Tawiah.

The women also acknowledged the effort of the MP on the program to change their lives. And  they promise to vote for him and the NDC in the coming election.