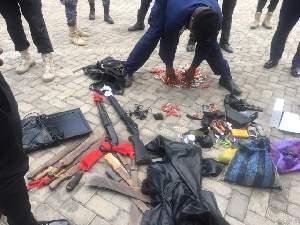 The counter-terrorism division of the police has arrested nine members of a highly sophisticated and armed land guard syndicate.

The gang engaged a fierce gun battle with the police at Kokrobite, a suburb of Accra, on Friday afternoon.

There were no casualties but the police say the fighting went on in the open for more than two hours before police subdued them.

The police are pursuing others who are said to be connected to the gang.