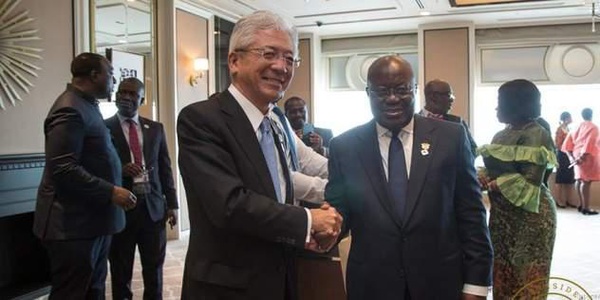 The President and Chief Executive Officer of Toyota Tsusho Corporation, Ichiro Kashitani, has told President Nana Addo Dankwa Akufo-Addo, to expect the first Toyota vehicle to be assembled in Ghana to be outdoors by August 2020.

Thanking the government of President Akufo-Addo for its help and support towards the realization of this project, Mr. Ichiro Kashitani stated that "we consider the project of the assembly plant a marriage. It lasts for life, and it is a long-term project."

The President and CEO of Toyota Tsusho made this known on Thursday, 29th August, 2019, when the Government of Ghana and Toyota Tsusho Corporation signed a Memorandum of Understanding for the establishment of a Toyota and Suzuki Assembly Plant in Ghana.

The Chief Operations Officer of the company in charge of the Africa division of Toyota Tsusho, Mr. Imai Toshimitsu, who was also at the meeting noted that the decision to set up in Ghana has been necessitated by the favourable economic climate prevailing in the country.